Q 7.2 : How is kinetic molecular model of matter helpful in differentiating various states of matter ?

Solid : In solids , molecules are very close to one another , they passes greater attractive forces .

Liquids :In liquids , distance between molecules is greater as compared to solids .

Gases : In gases , distance between molecules is too much .

Yes , there exists a fourth state of matter called plasma .

” Density of a substance is defined as the mass per unit volume .”

Unit : The SI unit of density is kilogram per cubic meter ( kgm-3 ).

Q 7.5 : Can we use a hydrometer to measure the density of milk ?

Yes , we can use hydrometer t measure the density of milk .

” The force acting normally on unit area at the surface of a body is called pressure .”

→ Pressure is a scalar quantity . 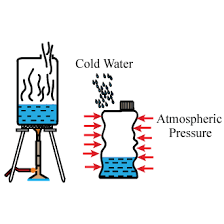 → ” The instrument used to measure atmospheric pressure is called barometer .”

Air Pressure makes a sucker pressed on a smooth wall stick to it .

→ The atmospheric pressure is greater than the pressure in the sucker .This pressure presses sucker on the wall .

Q 7.12 : Why does the atmospheric pressure vary with height ?

As we go up Atmospheric Pressure decreases .

Reason : Because the density of air is not uniform in the atmosphere . It decreases continuously as we go up.

Q 7.13 : What does it mean when the atmospheric pressure at a place fall suddenly ?

Q 7.14 : What changes are expected in weather if the barometer reading shows a sudden increase ?

→ It means , soon there will be decrease in the atmospheric pressure indicating poor weather ahead .

” Pressure applied at any point of a liquid enclosed in a container , is transmitted without loss to all other parts of the liquid .”

Examples : Rubber bands , elastic and other stretchy materials possess the property of elasticity .

” When an object is totally or partially immersed in a liquid , an upthrust acts on it equal to the weight of the liquid it displaces .”

→ This principle was given by a Greek scientist , Archimedes .

Q 7.19 : What is upthrust ? Explain the principle of flotation .

” The fluids ( liquids ) exert force in the upward direction when some object is immersed into them . This is called upward thrust .”

” The weight of fluid displaced is equal to weight of floating object inside liquid . Then object will not sink and keep floating . It is called Principle of flotation .”

” A floating object displaces a fluid having weight equal to the weight of the object .”

Q 7.20 : Explain hw a submarine floats the water surface and dives down into water .

Q 7.21 : Why does a piece of stone sink in water but a ship with a huge weight floats ?

” The strain produced in a body by the stress applied to it is directly proportional to the stress within the elastic limit of the body .'”

“ Elastic Limit can be defined as a limit within which a body recovers its original length , volume or shape after the deforming force is removed .“

You can ask any question .